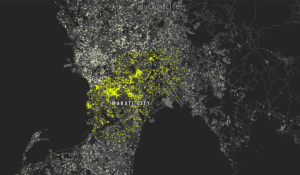 Time Magazine’s map of the selfies in the Philippines

No wonder my social feeds are full of selfies! Haha.

According to Time magazine’s The Selfiest Cities in the Word report (via TechInAsia), The Philippines emerged as the selfie leader in Asia followed by Malaysia. TIME counted the Instagram photos with #selfie hashtags and geographic locations for two five-day periods between January and March through the site’s API. The high selfie rate may be attributed to the growing smartphone adoption in the Philippines. In 2011, the Philippines was considered the “social capital of the world,” when Facebook became more popular than Google. Malaysia is the second country that has taken the most selfies in Asia led by its Prime Minister Najib Tun Razak who was recently spotted taking a selfie with Indonesian President Susilo Bambang Yudhoyono. Selfies are definitely a popular trend in Asia with Singapore, Thailand and Indonesia cities making it to the top 100 ‘selfiest’ cities list.

Reposted from @thecapanzanas Sabi nila, “ganda nanay mo, di mo kamukha. HAHAHA 🙄 Thanks to our favourite @southseapearlsphilippines_ @southseapearlsbyfarlian_ph for my customised Southsea pearls in 14k gold setting earrings and mom’s ear climbers and necklace! Check out their accounts for gorgeous #SouthSeaPearls ❤️
To this human who seemed to have implanted a gps in me. The moment my plane lands in Manila (every time), he’ll be in my condo’s parking, waiting for me. He invited himself to my sister’s wedding and prepped his outfit way in advance (see pic 4) 🤣 Well, I’m glad you did that cause I know that you know that no invitation’s needed for you to come, cause you’ll always be welcome in our family. I miss you already, @_markislove_ ! Sana nga magka boyfriend ka na.
More wedding photos from #NextCHApterWithJay ‘s Lovefest. My wedding was in a barn, @chacaparros is so brave to have hers in a huge outdoor garden after Taal Volcano’s explosion. 🙌🏻 You’ll always be my strength cause you’ve always been my brave little sister, Labs.
Classmates and a lot of familiar faces, happy to see everyone! ❤️ #NextCHApterWithJay

Stories, photos and views on this blog are all mine, unless stated otherwise. I make no representation as to the accuracy or completeness on any information here or found by following any link on the site. Also, I cannot guarantee the completeness, accuracy, honesty or even politeness of the comments. But since this blog is made to remind me of the wonderful life I’m living, I guarantee you my honesty in every post. Have fun!